The month of September, preceding the High Holidays and our New Year, will be critical for Israel and for the Israeli-Arab conflict.

With Palestinian-Israeli negotiations at a standstill, the Palestinian initiatives at the UN, in a bid for recognition of statehood, will only further complicate matters. Moreover it will not bring the solution to the conflict any closer – it will internationalize it only further.

Israel’s position in the region has dramatically changed in the past few weeks.
After a period of relative quiet, terror attacks from Gaza have been launched again against Israel’s south.

Past strategic alliances are shifting – both Turkey and Egypt have turned their backs on Israel. The Arab spring has given way to the Arab autumn, with unknown results for the future of these countries and for the bid for democracy of the younger generation.
The UN report on the Mavi Marmara on the one hand, and on the other hand the border incident with Egypt, which has left seven Egyptian soldiers dead, have brought about a severe deterioration of relations with these two countries.

It is easy in such a context to direct the frustration and the anger of the population towards Israel.  In the past two weeks, Israel has had to face the most difficult setbacks in many years: the evacuation of its personnel from three Embassies in our region.

Agreements and relations painfully crafted over many years are collapsing. Even if some of these developments are not the direct responsibility of Israel , Prime Minister Netanyahu and his Foreign Minister’s  arrogant behavior in the face of  crises have only helped to make things worse.

Regrettably, the current Israeli Government has not come up with any clear political vision or any peace plan of its own, a move which could have brought the parties back to the negotiating table. Its sole diplomatic activities have been to try to block the Palestinian initiatives. As a result of this, Israel’s isolation in the world is growing by leaps and bounds.

There is no doubt, that had there been a serious, credible peace process between Israel and the Palestinians, some of these developments could have been averted.

It is difficult at this stage, to predict the results and consequences of the UN votes. Perhaps the most problematic potential impact of UN recognition of Palestinian statehood, is to provide decisive momentum for existing trends within Palestinian politics that favor the abandoning of the negotiating paradigm.

In his May 2011 New York Times article, President Abbas himself extolled the benefits of recognition in terms of advancing non-negotiation alternatives.

Despite the difficult path ahead, there are still those in Israel who strive towards forming a lasting peace agreement between Israel and the Palestinians.

Peace Now, Israel’s leading peace organization believes in the urgency to secure the only viable solution to the conflict, the two state solution.

We here, and our friends and supporters abroad, must make sure that serious negotiations can be engaged again.

One of the greatest triumphs over the last year involved a successful petition to have the settlement of Migron evacuated on legal grounds; the Israeli High Court ruled Migron was built upon private Palestinian land and ordered for it to be evacuated by March 2012.

In addition the recent Israeli summer protests, where hundreds of thousands of Israelis demonstrated against the failed policies of the government and demanded real social justice and democracy, contributes to the feeling of an “Israeli Awakening”.

One of our greatest tasks will be harnessing this momentum and drawing the connection between the social justice movement and the political policies that spend millions of shekels on settlements as Israelis sleep in tents on Rothschild Boulevard demanding affordable housing.

Israelis are leaving their apathy behind to work towards change; Peace Now can only be a force for change in political policies and succeed in leading public opinion with the help of your support and donations.

Rosh Hashanah marks the beginning of a New Year and new set of challenges.

With your help, this coming year, 5772, can hopefully be the year of peace in the Middle East – I urge you to make a donation to Peace Now and sponsor their activities to bring peace in the coming year. 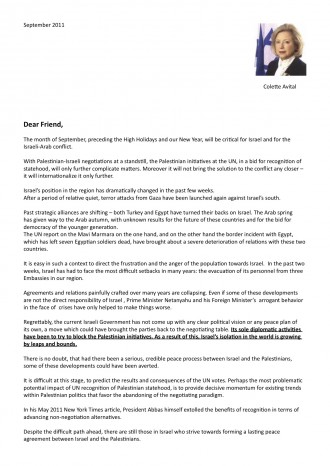 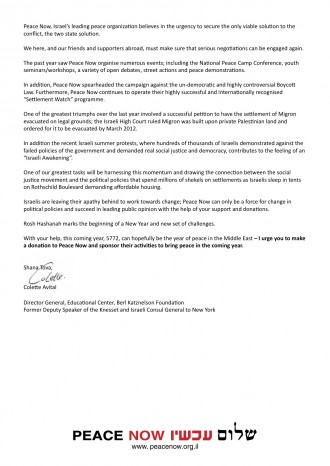