A few weeks ago, the Moriah company, owned by the Jerusalem Municipality, issued a new tender for the construction of a pedestrian bridge over the Ben Hinnom Valley (Wadi Rababa), south of the Old City of Jerusalem. The tender replaces an earlier tender that was published in January 2022, but it was not executed. The plan to build the bridge was promoted by the Jerusalem Development Authority (JDA), which is a government body in charge of the development of Jerusalem. According to previous tender documents, the Elad settler organization was in charge of this project implementation. Nevertheless, according to the new tender, Elad’s name was removed from the documents.

The tender was closed on May 24, and it seems that currently, the contractors are being selected to carry out the work. The municipality has already granted the building permit, so there is a chance that the work will begin soon. The cost of the project is estimated at NIS 10.4 million.

Peace Now: “The footbridge over the Hinnom Valley is part of the ‘biblical Disneyland’ that the Israeli government is promoting around the Old City, above and below the ground, including ‘attractions’ such as tunnels, cable cars, and a zipline while ignoring the existence and the lives of the residents of the area. The planned bridge is not only totally disconnected from the Old City environment, and poses a severe threat to its unique landscape, but its entire purpose is to serve Elad’s settler interest. The Israeli government has delegated one of the most sensitive and important places in the region to an ideological right-wing organization that is blatantly changing, with the help and support of the government, the sacred and unique character of Jerusalem for the three religions that hold this city holy.” 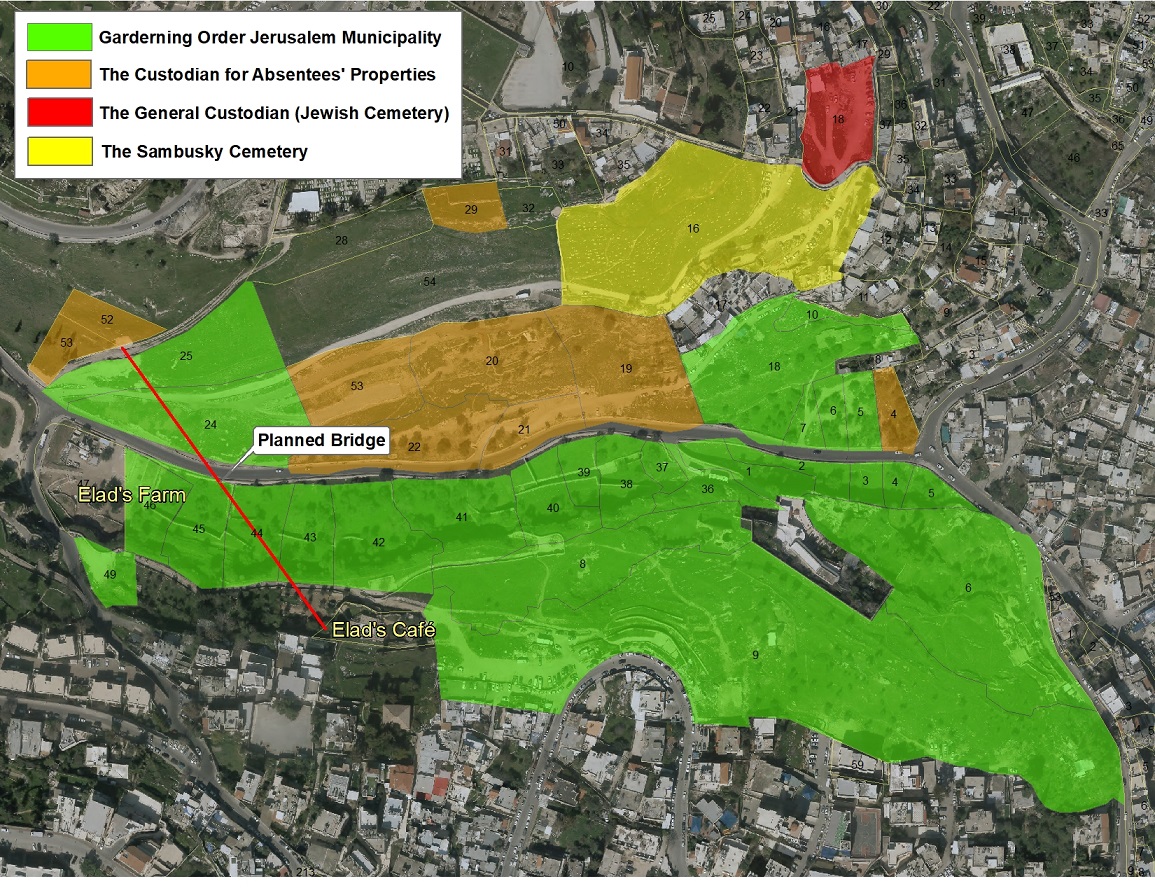 The planned bridge: ‘an extreme experience in an urban environment.’

The planned bridge is a footbridge connecting the southern bank of the Ben Hinnom Valley (Wadi Rababa) and the northern bank on the slopes of Mount Zion.

The south end of the footbridge is planned to be within a compound controlled by the Elad settler organization, where it runs and operates a cafe and an event venue. The organization purchased the house in a dubious deal from a person that did not own the land, and subsequently, the Palestinian landowners filed an eviction lawsuit against Elad, which is going on for several years and is still pending. The north end of the footbridge ends on the slopes of Mount Zion, southern of the Protestant cemetery, in an area that was declared as ‘absentee property’ and leased by the Israel Land Authority to the Israel Nature and Parks Authority (INPA). The bridge passes through the wadi, right over privately owned plots that have been transferred to the management of the Elad settler organization through the INPA, which was issued as a special ‘gardening order’ by the Jerusalem Municipality. ‘Gardening orders’ allow Israel to ‘temporarily’ take over privately owned land, based on the argument that the private owners are not using the land.

In the past year, the Elad settler organization has begun operating an ‘agricultural farm’ in these privately owned lands, hosting groups of students, soldiers, and more visitors for recreational and agricultural activities. Thus, just as Elad’s settlement projects in Wadi Hilweh in Silwan (“the City of David”), in the Emek Tzurim Park, and the Peace Forest, Elad manages to attract large numbers of Israelis to visit East Jerusalem. This is another type of settlement, specifically designed not only to gain control over the physical space and push out the Palestinian residents from the area but also to influence the public opinion regarding the importance of these territories to the Israel public and interest. This will make the possibility of a future agreement on Jerusalem even more difficult, and it is already increasing the tension and deepening the conflict.

In this regard, it should be noted that in August 2020, the INPA signed a contract with Elad for a ‘joint project’ with Elad for the operation and establishment of this agricultural farm, and in fact, they transferred the control of tens of dunams (some are not even included in the announced National Park project). According to the contract, Elad is expected to invest up to NIS 5 million in the project, while the INPA is expected to invest up to NIS 100,000. Elad is also expected to conduct and finance some activities such as ‘building terraces, paths, and stairs, planting vegetation, installing signage’, and more. It later turned out that the JDA allocated a total budget of NIS 62.5 million to invest in developing various projects in the Ben Hinnom Valley. A part of this budget is intended for the exact same activities that Elad is supposed to conduct and finance (building terraces, paths, and planting, among others, as it was mentioned above).

The planning of the footbridge was made in the context of a summary proceeding of a building permit, and not within a master plan, even though this is a significant change caused to the landscape and nature of the environment of this particularly sensitive area. Peace Now, together with Emek Shaveh, filed an appeal against the approval of this building permit and then appealed to the district court. But eventually, the district court accepted the position of the municipality and the JDA, stating that this bridge constitutes a ‘road’, and this is allowed according to the city-plan number AM/9 that was approved in 1977 and designed to protect the unique character of the Old City basin and prevent uncontrolled development).

One of the arguments that were raised in our appeal was that the current plan allows the construction of sports and recreation facilities in public areas and parks, but a footbridge of more than 200 meters at a height of tens of meters cannot be regarded as a ‘sports facility.’ Hence, a full planning proceeding including the preparation of a master plan is required, while the public’s right to oppose the decision should be respected. The response of the municipality and the JDA states that the bridge is not a sports facility, but a ‘road.’ The court accepted this argument, asserting that under the current plan, it is allowed to delineate new roads and that this footbridge is ultimately a bridge.

It now appears that according to the tender documents, this bridge was not supposed to be a ‘road’ in the sense of the project, but rather: “a 207-meter-long pedestrian suspension bridge designed to give an extreme experience in an urban environment…the purpose of the bridge is to be an attraction, and it is defined as a sports facility.”

Next to the footbridge that will start to be built in the near future, the Elad settler organization operates a coffeehouse and an agricultural farm. But the plans for tourism development and the control of the area do not stop here. Apparently, the JDA also intends to develop and build the Ben Hinnom Valley Music Center, and open a coffee shop there. In addition, there is a plan from the municipality to establish a visitors center and a diner on the slopes of Mount Zion, not far from the northern descent of the planned footbridge. Thus, there will be more and more tourist attractions to encourage more tourists to come and visit this sensitive area.

Moreover, the Elad settler organization has been working hard to restore and fence the ‘Sambuski Cemetery’ on the north bank of Wadi Rababa. A Jewish cemetery was operating on the site more than a century ago, but today, almost nothing remains of it. In recent years, Elad has managed to take over properties near the Sambuski Cemetery within the Wadi Hilweh neighborhood in Silwan. Through these tourism projects and the settlement houses, the Elad settler organization is attempting to produce Israeli territorial contiguity from Wadi Rababa to Wadi Hilweh, through the eastern slopes of Mount Zion. 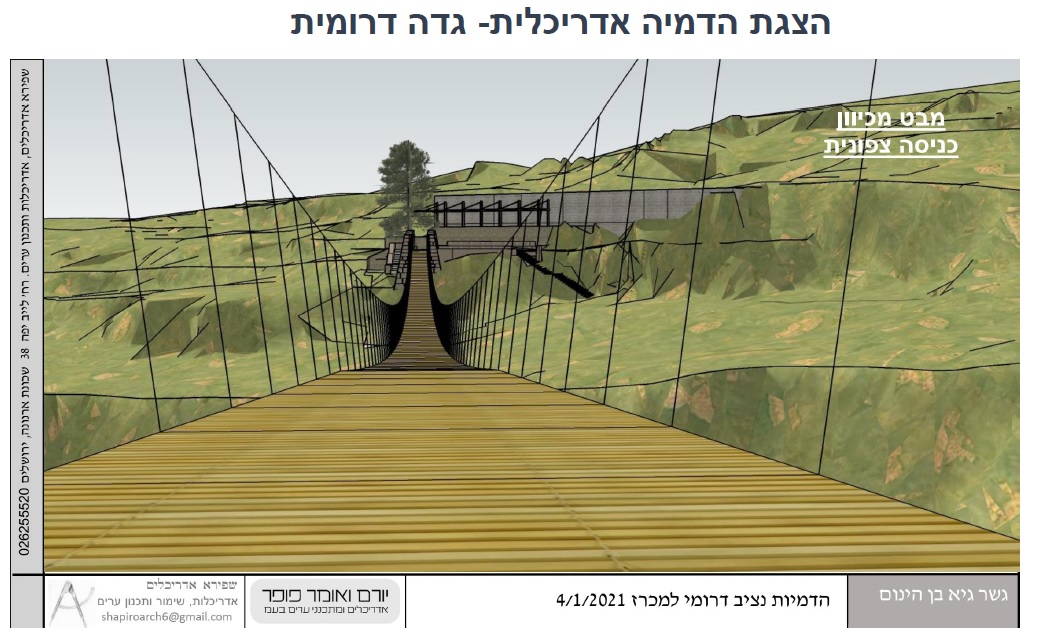 imaging of the planned footbridge, taken from the Moriah tender documents