In the last few days, following the killing of the three Israeli teens, we witness alarming developments on the ground in settlements: Three new (serious) outposts were established and a new road to Givat Eitam outpost was paved, in addition to other several protest tents and other developments that the settlers put up in different places in the West Bank.

The settlers are taking advantage of the killing of the three teens in order to set facts on the ground that they wouldn’t dare to do before. We don’t know if they got a green light from the government (although such a green light could not have made the acts legal, short of planning procedures), however, those developments will be judged by the government’s reaction.

If the government doesn’t evict them in the coming days, it will be much harder to remove them and they will stay and develop as settlements. The settlers might continue to seize the opportunity of the current political and security situation in order create more facts on the ground. 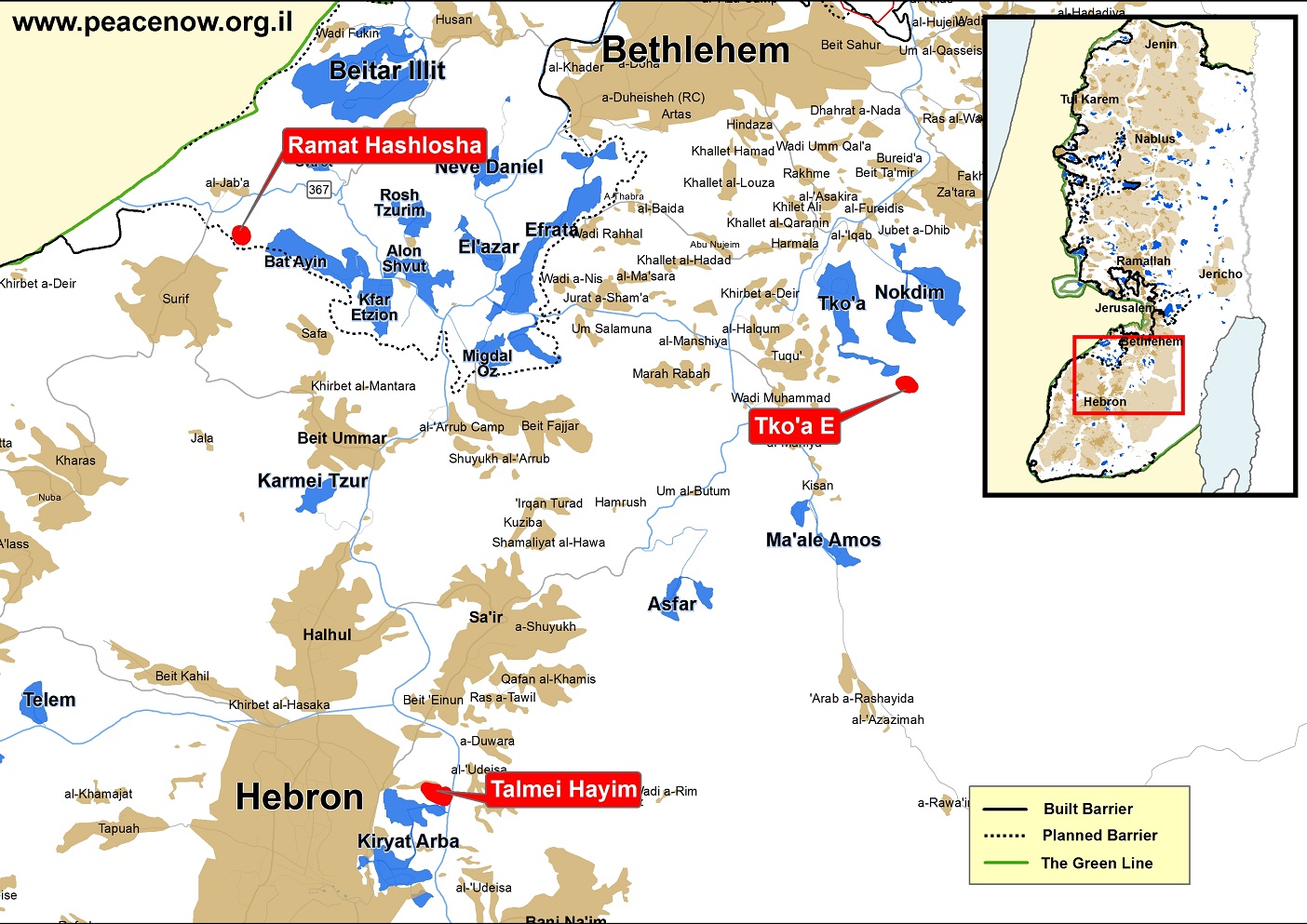 Unlike other cases where following a terror attack settlers would put up a protest tent or a shack, calling it an “outpost”, this time the Settlements’ Municipalities were involved in the establishment of the outposts and supplied trailer homes and basic infrastructure of electricity and water. (The official website of the Gush Etzion Municipality called settlers to come to guard and support the places, and in Kiryat Arba, the mayor of the settlement took part in the establishment of the outpost).

A. Ramat Hashlosha (the hill of the three) – At least 4 Caravans were put up between the Palestinian villages of Zurif and Jaba’a, south east of Bethlehem near the settlement of Bat Ayin. The outpost is meant to prevent the potential connection of Jaba’a southward with the Palestinian territories in a case of land swaps as part of a final status agreement.
Most of the land of the hill on which the outpost was built was declared as “State Land” and was added to the municipal boundaries of Bat Ayin in 2001. In the past, the settlers proposed a construction plan for the site (plan no. 419/3) that was rejected by the minister of Defense in September 2006.

B. Tkoa E – The Gush Etzion Municipality at least 4 caravans one km south of the Tkoa settlement, east of Bethlehem. As of year 2013, the area was not part of the municipal borders of Tkoa. In the past, the lands on which the caravans were put were not declared as “State Land”, however, during 2013, following the work of the “Blue Line Team” of the Civil Administration, the land was added to the declared lands, without an official declaration.

C. Talmei Hayim – The outpost was built near the houses of the Palestinian neighborhood of Al-Baqa’ in Hebron, on a hill outside the fence and north of Kiryat Arba. The settlers have been trying for many years to establish an outpost on the hill (under the names: hill 18, hill 22 and Mitzpe Avihai). The place became a point of friction and tension when settlers attacked Palestinians from the area. The IDF evicted the outpost several times. This time, trailer homes were brought to the place, and the mayor of the municipality of Kiryat Arba, Mal’achi Levinger, participated in putting up the structures.
Although the hill is outside of the fence and the Special Security Zone of the settlement, the land is included in the Municipal borders of Kiryat Arba, and the Ministry of Housing has an initial plan for hundreds of housing units that was never promoted or approved. The settlers would like to push forward the plan by starting the settlement on the ground.

On the night between Thursday and Friday, settlers have opened a 500 m. road connecting between the Efrat settlement and the outpost called Givat Eitam. This is a dramatic change in the situation, allowing the settlers to easily access and develop the outpost without passing in private Palestinian lands. See more about the issue here. 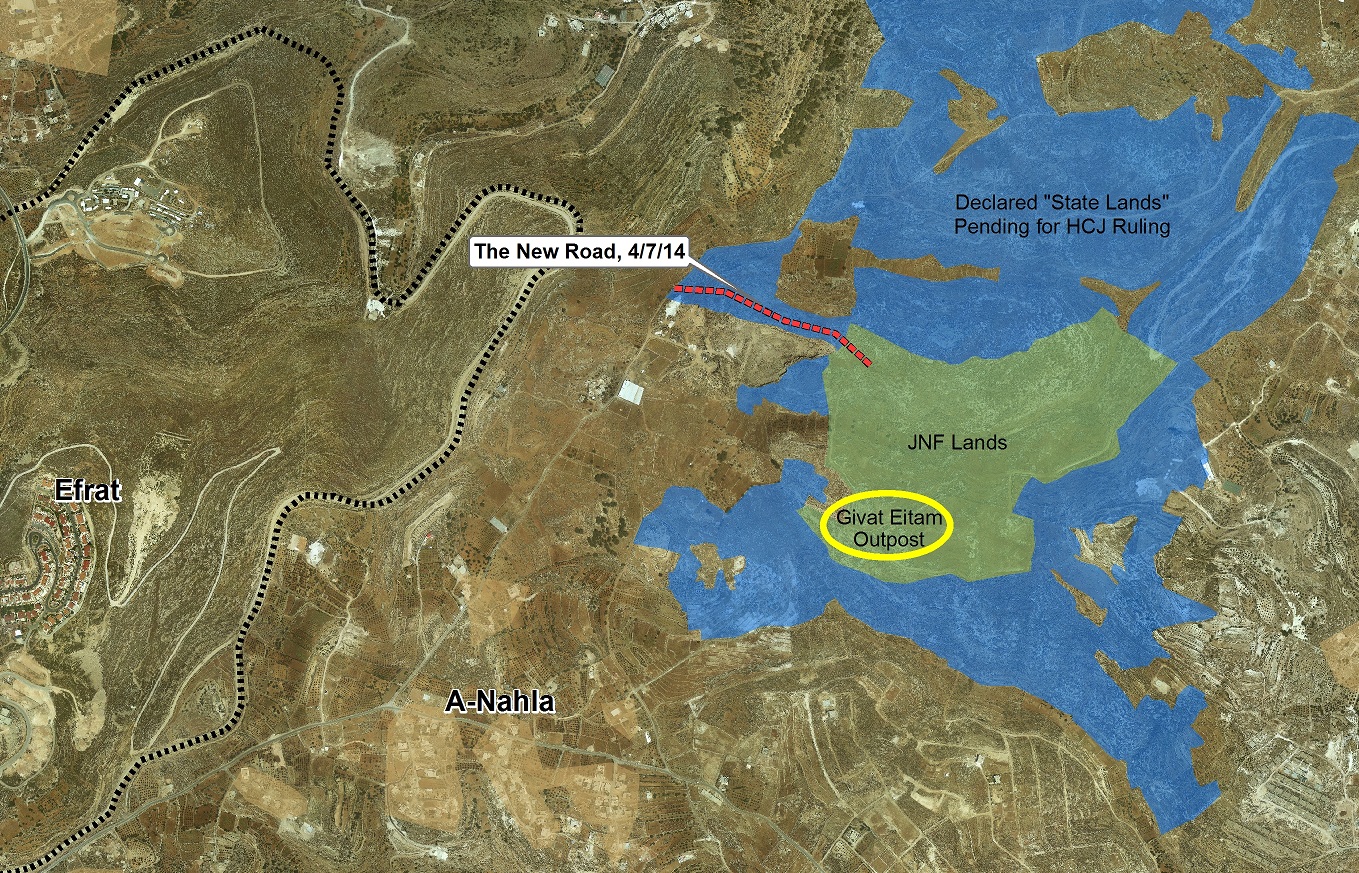