The Ministry of Housing and the Israel Land Authority today issued tenders for the construction of 2,572 new housing units across the Green Line: 2,112 of them in settlements throughout the West Bank and 460 in East Jerusalem. Several tenders for industry and commerce were also published. Note that these advancements are in addition to the 780 units promoted in plans for West Bank settlements this week. 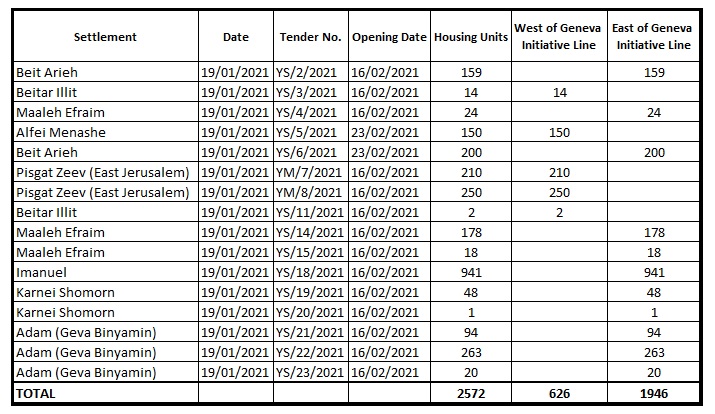 75% of the tenders’ units (1,946 housing units) are in settlements that Israel will be forced to vacate under a permanent agreement (according to the Geneva Initiative model).

Tenders are housing units for construction that are marketed by the government. With such tenders, contractors are invited to submit bids for the purchase of the rights to build the houses and market them to the buyers. This usually means that within about two years of the tender being announced, construction begins on the site. Beyond the Green Line, there are tenders in only 13 of the settlements which are managed by the Housing Ministry, and in neighborhoods in East Jerusalem. For more information on the planning process and tenders, see here.

Peace Now: “Our out-of-touch government leadership continues to press on with its mad scramble to promote as much settlement activity as possible until the last minutes before the change of the administration in Washington. By doing so, Netanyahu is signaling to the incoming President that he has no intention of giving the new chapter in US-Israel relations even one day of grace, nor serious thought to how to plausibly resolve our conflict with the Palestinians.

The tenders published today are in addition to the 780 housing units approved this week in the settlements, the opening of the tender for thousands of units on Givat Hamatos and the billions’ of shekels investments in roads and infrastructure that will double the number of settlers.”

The attempt to legalize outposts before the new US administration

Earlier today, it was announced that Netanyahu sought to pass a cabinet decision on the establishment of 6 new settlements by legalizing (or “regularizing”) these current outposts and “neighborhoods,” as well as allocating resources toward the legalization of many more outposts. In light of the sharp rise in COVID-related deaths, the new dangers of virus mutations and the scale of seriously ill patients, a government hearing was scheduled today and Netanyahu intended to take advantage of the cabinet meeting before the change of government in the White House tomorrow to pass the resolution.

According to reports, the Foreign Ministry and the Ministry of Justice have expressed opposition to bringing the issue to a government decision on the eve of the US change of government, and even expressed concern that the decision could affect the investigation into the International Criminal Court in The Hague. In the end, the issue was not brought up for discussion, and the various reports attributed the removal of the issue from the agenda to the opposition of Ministers Benny Gantz and Gabi Ashkenazi, as well as the head of the National Security Council.

Principles of the proposed resolution (not brought up for discussion)

1. Establishment of six new settlements – Since the Oslo Accords and since the outpost phenomenon began in 1996 after the election of Netanyahu, the government has almost completely refrained from announcing the establishment of new settlements. Although Israeli governments have established since then more than 140 settlements, they have done so unofficially, as “neighborhoods” of existing settlements and in violation of the planning and building laws established by Israel itself regarding construction in the settlements. To date, only 6 settlements have been officially established by government decision: Rechelim, Sansana and Bruchin, (23 April 2012), Amichai (30 March 2017), Havat Gilad (4 February 2018), and Mevo’ot Jericho (15 September, 2019).

The settlements that were to be established by government decision:

Ovnat – a settlement on the shores of the Dead Sea east of Bethlehem, which was established as a military base and became a settlement, as a “neighborhood” of the settlement of Mitzpe Shalem, about 12 km away as the crow flies.

Metzoke Deragot – a tourist site on the shores of the Dead Sea east of Hebron, formally established as a “neighborhood” of the settlement of Mitzpe Shalem. The government intends to turn the place into a residential settlement and there is even an organized group of families who plan to settle in the place (“Garin Harel”).

Avigail – an outpost in the southern Hebron Hills established at the end of 2001, with dozens of families.

Asa’el – an outpost in the southern Hebron Hills established in 2002 with dozens of families.

2. Allocation of NIS 20 million and 13 salaries toward the eventual additional legalization of other outposts

It should be noted that a similar draft resolution prepared a few weeks ago was not ultimately raised in the government; however, from it one can learn about the government’s intention in working to legalize the outposts.